Growing up in Southern California the word “chaparral” was just simply part of the vernacular. Chaparral, the miniature forest, was seemingly everywhere. Chaparral is a shrub community made of many different plants. You will commonly see manzanitas, chamise, ceanothus and sages. I never gave it too much thought other than it was a very dusty, earthy green that was my childhood. I traded it for the coastal redwoods. The richer dank green to the north. I poo pooed the dusty green of Southern California. That is until several ecology classes and nine years later I learned to understand that this hardy shrub ecology was really quite sensitive, special and endangered. This is especially true of the Coastal Sage and Chaparral community. On December 30th I was given the opportunity to do a little exploring of Cabrillo National Monument in San Diego. When my friend mentioned that in San Diego the coastal chaparral is roughly only 1.5% of it’s size before development I felt inspired to look a little harder into the subject. Indeed from Santa Barbara down into Baja the coastal chaparral and sage community is a meager 15% of what it once was. Several of these species are endemic to not just in California but to San Diego itself. All chaparral, not just maritime chaparral, is important habit for many species of birds and small mammals. That sometimes impenetrable pokey shrub is exactly what keeps them safe as well as fed. There are really only a few good pockets of coastal sage and chaparral left in San Diego county; Camp Pendelton, Torrey Pines State Park and Cabrillo National Monument. There were several signs and some ropes asking folks to stay on the trail. I don’t remember any ropes from when I was a kid and my hope is that folks will start to appreciate how sensitive this community is just like I have.

Several plants had bloomed with the recent rains. I snapped a few pics not really knowing what plants I was looking at but, I’m a sucker for flowers. A couple were relatively easy to look up. First was the lemonadeberry (Rhus Integrifolia), a taller shrub with clusters of pretty pink flowers and leaves that look almost like an oak. The Coastal Agave (Agave Shawii) caught my eye with it’s tall flowers protruding from the typical agave base. These flowers had long past bloomed and were brown and dried yet still striking in form. The lemonadeberry almost exclusively grows in southern CA and northern Baja and the Coastal agave only grows in two small locations within San Diego, Cabrillo National Monument and Border Field State Park. Although it grows quite well in northern Baja along the coast the recent development there is quickly degrading it’s habitat. 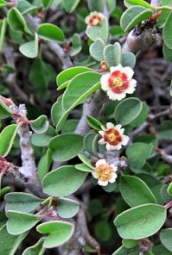 The California Boxthorn (Lycium Californicum), in the flowering portion of the nightshade family, was interesting to me because it seemed a plant between taxonomy. It has strong woody stems with small plump leaves reminiscent of a succulent and small white flowers. I had taken a picture of another flowering shrub that gave me quite a chase as to figuring out what it is. I happened upon this very useful website (http://www.sdplantatlas.org/Ecoregions.aspx) that has all the plants listed in San Diego by ecoregion. As luck would have it’s in the Euphorbiaceae family and so my search didn’t take me too far down the rabbit hole. I clicked on a name that could fit and there is was! Euphorbia Misera or commonly known as Cliff Spurge isn’t necessarily special but the flowers are quite pretty and it was worth the search.

All in all Chaparral while, at first glance, might seem a dull green is worth looking a little closer at and seeing it for the incredibly hardy, fire and drought adaptive, bird and mammal protecting plant community that it is. I’m glad that in my visit to San Diego I was able to give Chaparral a look with new eyes and take the time to read up on it for my first official post to Vagabond Naturalists.