As I bent forward to look at a strange bit of Saguaro skeleton I felt a sharp sensation that quickly flashed me back to my earliest memory. I had to be less than 2 years old and my walking skills must have been mighty wobbly because as I was stumbling around outside our mobile home in the Mojave desert I promptly sat into a prickly pear cactus. My mom spent an hour plucking the needles out of my rear. This time around I only gave Rachael 10 minutes because we needed to come out from behind the mesquite tree and rejoin our fellow volunteers. Most deserts have a variety of foliage that endeavor to stab you, a successful defense mechanism for plants growing in a harsh environment with scarce food sources. The Sonoran desert however is greener and has more biomass than you’d expect for such a hot and dry place. This is largely the result of having two wet seasons; saturating winter rains and dramatic summer monsoon downpours. This doesn’t mean a lot of water but in a place where life waits out the dry in order to flourish with the wet the Sonoran in known for a higher variety and density of life. Life that is more than happy to fill my unobservant butt with barbed spines.

The good thing is we were here to get in close contact with the land and we were fortunate enough to find a drop in volunteer opportunity at Saguaro National Park. Though unfamiliar to us Californians, buffelgrass has become a widespread invasive plant in the deserts and rangelands of the Southwest an all to common example of a plant introduced as cattle feed that got out of hand. A fiend for water it can cheat the locals, tapping the scarce resource before it ever gets an inch into the soil. Removing exotic plants can appear futile. They come back with the repetitiveness of a bad horror movie villain. However native plants are intimately adapted to their environments and I’ve seen first hand that given a chance they can hold their own. This committed group of volunteers is trying to give the park that chance. By focusing on specific areas and with persistent effort the hope is to remove the invader and allow the native plant community to keep it at bay.

Hemmed in by suburban Tucson, Saguaro National Park has a lot of folks who spend time there on a regular basis. A number of the people we worked with had literally, while hiking or riding bikes through the park, stumbled upon the chance give back to a place they care about. After being mostly to ourselves in the desert for several days I think Rachael and I were in need of some social interaction and camaraderie. Getting a bit sweaty and dusty with these good folks was just what we needed. I don’t even hold any resentment toward my prickly pear friend. It was a good reminder to pay attention and be present in the moment. 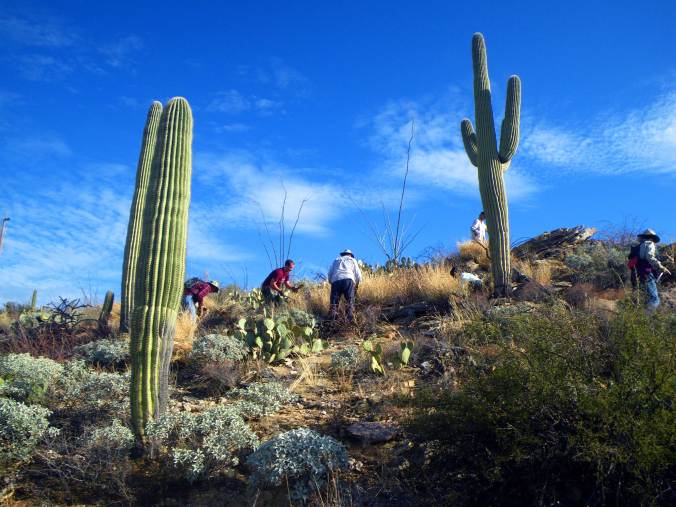