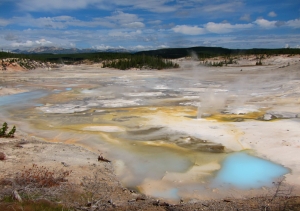 As most things do it started with coyote. He came into the village and stole a sack of grain. When the villagers chased him he ran into the sky spilling the grain all over the night and created the stars. Sitting in Yellowstone National Park looking at the magnificent milky way I reflect on coyote. Earlier in the day we saw some bighorn sheep walking along a steep hillside looking very content on their precipice of protection. All the animals are wild here. The bison cross the street and gives cars looks of annoyance or daring. Calling in their belch like manor out to each other their calves still yanking at their moms teats the moment they catch back up with her. The males posturing with grunts and striking their hooves on the dirt. Other bachelors are removed from the fray by choice or by loss and sit for long minutes in their wallows. Foxes sneak by and under the watchful sight of tourists who are trained on the grizzly bear in the field busy munching. For us lucky enough to see them they might look back with their sly smiles before dipping out of view and down the hillside. The elk graze casually with one eye on where they left their baby and one looking for wolves who made their way back into the park some twenty years ago. Tourists sit vigil by their spotting scopes for a lucky sighting of the wolves while ranchers outside the park pray they stay here or else they’ll get their rifles. The pronghorn pay no nevermind to any of it, the wildest of them all. 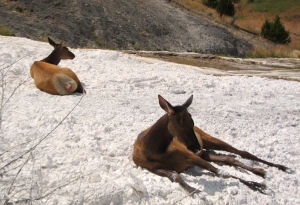 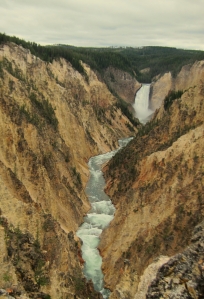 Small birds flit and fly and scrap for seeds while large birds dive for fish. Small mammals scurrying in the brush, across the road, they bark at you from trees telling you to git from their food stores. Wild thunderstorms produce wild flowers growing in fields and at the base of new trees. New trees growing in the shadows of their elders still standing grey and weathered from long ago but not forgotten wild fires. Fires that burned hot and scorched the earth, vacuuming up the too thick under brush making room for new fresh life.

The ground under our feet constantly shifting, sliding, pushing and bubbling bubbling bubbling up sometimes shooting into the sky in a dramatic release of pressure. Steam constantly rising into the sky. The caldera pushing up, the rushing rivers cutting down, carving, breaking apart millions of years of deposition. In Yellowstone this too is coyote’s fault for many years ago there was no river. Coyote knocked over the old woman’s large basket full of water and fish. This created the rivers. Coyote trying to make amends tried to make rock dams but the water knocked them over and this created the large waterfalls found in Yellowstone’s Grand Canyon. Coyote is wild. The rivers are wild. The crowds rushing and pushing and climbing over each other for a waterfall selfie or a glimpse of what ever made people pull their cars over are wild. All in an effort to somehow absorb some of this place. Absorbing the steam into their skin, the smell of the rain on the sagebrush into their nostrils, the sound of the bison or the howl of a wolf for the kind of souvenir that only the soul can cherish. 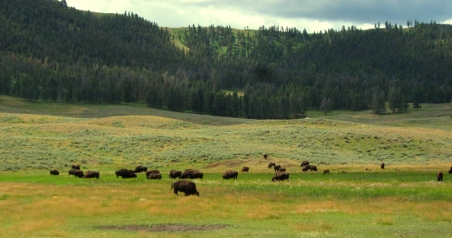